I've had a great July so far. Here are some of my favourite products and such. 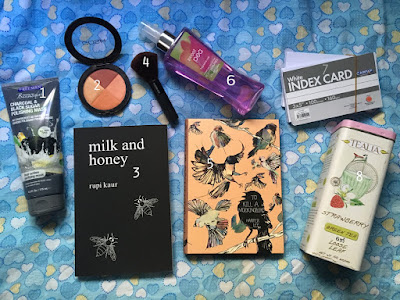 1. Freeman Charcoal and Black Sugar Polishing Mask | It doesn't really apply like a mask but is more of a cleanser + scrub which works really well to remove dirt and keeps face fresh and smooth. I love the rubbery charcoal feel.

2.GOSH multi-color blush | This is my everyday blush and sometimes I wear all four colours swirled together but mostly I love the peach which gives a subtle soft, rosy cheek!

3. Milk and Honey by Rupi Kaur | The illustrations add so much value to Rupi's words. She's writes right from her soul, raw and unpolished yet so poignant. I love this book and have so many favourite poems from it.

4. Manicare Blush Brush | Ah this is so soft and perfect for applying blush.

5. Klevercase To Kill a Mockingbird Kindle Cover | Ever since I saw this cover on an instagram post, I knew I needed it in my life and I love it more everyday.

6. Sweet Pea Fragrance Mist from Body Collection | Has the sweetest smell, I mostly just spray the room with it because it leaves a whiff of earthy yet sweet fragrance.

7. Index Cards | I am an avid index card user. Throughout uni, I made my own index cards from hard paper so imagine my excitement at finding this at Asrafee, I basically squealed and got it.

8. Tealia Strawberry Tea | My very good friend Oppo got this for me and even though I'm not a fan of green tea, this tastes great and the tin is so precious.

Here are some other things I've been loving this month.

BrainDead S1 | I didn't think I would like a political drama but the bugs angle to it is hilarious and I mostly watch it for the "Previously on" part because it rocks.

Lush Life by Zara Larsson | I'v been playing this on repeat so much because this song is so nice and it reminds me of some time back.

BooktubeAthon 2016 | This is my second year taking part in the Booktubeathon which is a week long reading marathon hosted by Ariel Bissett where you just read as much as you can. I love the energy and the fun challenges and giveaways going on as well as the lovely community. Booktube is just wonderful!

What are some of your favourite products and things?
Scribbled by Shaha when the clock ticked 2:00 PM No comments:
Email ThisBlogThis!Share to TwitterShare to FacebookShare to Pinterest
Labels: favorites

I don't know why but this month's going in a blur. I honestly can't remember what I've done so far except for a couple hangouts and Booktubeathon. I have been reading and watching quite a lot of things. 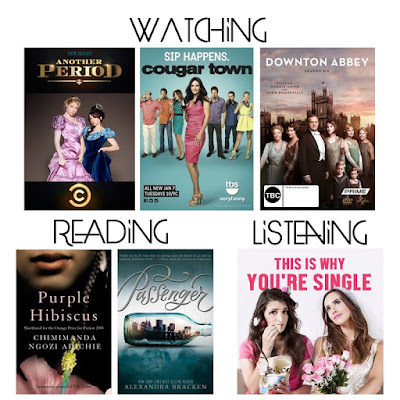 Another Period S2 | I've been watching this since it started and loving the satire and the humour. It's basically Downton Abbey meets KUWTK + way too much drama and comedy. The jokes on the era are on point.

Cougar Town S6 | Last season with the gang. I love the gang, especially Jules and Ellie. They're so much fun and the title jokes never get old. It's crazy but then again, I'm a fan of crazy. I'm going to miss them once I catch up with the season.

Downton Abbey S6 | I recently finished watching the last season of Downton Abbey and it gave me the shock of my TV show life but that ending was so perfect it mad my heart happy. It was definitely sad to see them finish only through 20's (I was secretly hoping they would continue until 50's, if only just to see the fashion) but it ended on the best note. I will miss the folks of Downton Abbey, especially Lady Edith and Mr. Branson.

Purple Hibiscus by Chimimanda Ngozi Adichie | I honestly got this only for the author cos I've heard great things about her and it's true. Her writing is beautiful and this story is so far extremely close to heart and so rare. I'm only halfway through and it's already filled with so much emotion, I'm slowly devouring this book.

Passenger by Alexandra Bracken | I'm reading this book for two of the challenges of Booktubeathon (read a book after sunset, read a book you bought after hearing on it on Booktube) and so far, it's alright. I'm not that big a fan of the characters but the time travel aspect is interesting. I'm allowing this book to catch me off guard. I've heard way too many booktubers rave on about this book (which was why I bought it just when it came out but for some reason never got around to reading until now)

This is Why You're Single | This is such a fun podcast by the two funny and remarkably witty ladies; Laura Lane and Angela Spera. Each week, they dissect at a reason why you're still single, and as a singleton, I find it so very appropriate and hilarious.

What's keeping you entertained this month?
Scribbled by Shaha when the clock ticked 2:00 PM No comments:
Email ThisBlogThis!Share to TwitterShare to FacebookShare to Pinterest
Labels: currently

If you know me at all, then you know I am obsessed with Hannah Brencher ever since I found out about #moreloveletters!

Hannah is the founder of More Love Letters, an organization that promotes writing and sending letters of love and encouragement to those around you and strangers. You can check out her TedTalks below so she can explain what she does better than I could ever.

She's so smart and wonderful and undeniably kind. I would like to have coffee with her and have deep conversations, of raw emotion and pouring of the heart. She makes it seem that you could be her best friend. She's so talented and she's inspired me to keep going, to put more love out there despite not getting it in return. She's made me fall in love with letter writing all over again.

I've enjoyed being able to share in her journey and to see how far she has come and how many people she has inspired on the way. I haven't read her book yet but I got it as soon as it was out because I knew this girl was fire and I needed to feel her fire. She inspired me to create my Sunday Newsletters which have in return made me so happy and accomplished as well as do humbled to know I'm putting myself out there all vulnerable and ready to accept people.
She has shaped my life in ways she will never know and I'm so glad to have stumbled upon her blog three years ago because I know my life is better because of it. She's a kick-ass, talented writer and a constant cheerleader, always ready for what life throws around her words are magic. They've healed and given hope.