For some reason, I have really not been able to watch or read much this month. I have been listening to a lot of music tho, mostly at work and on transport. Meanwhile, I have been a bit invested in some of these. 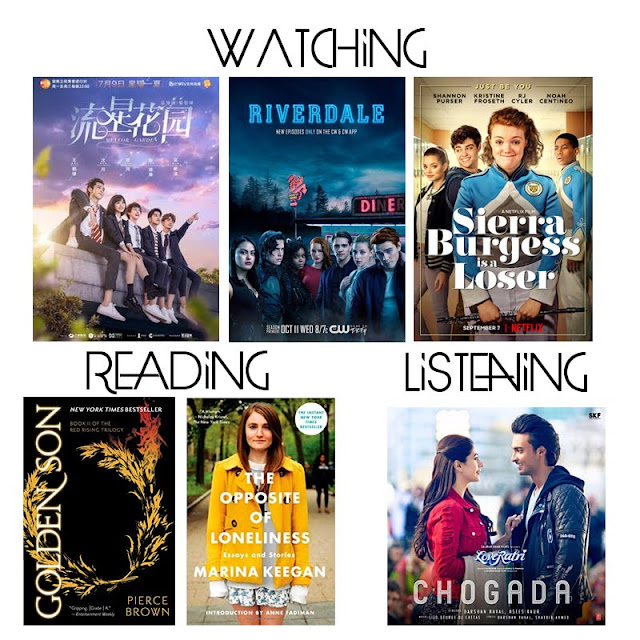 Meteor Garden | This is a Chinese remake of a Chinese remake of Boys Over Flowers which is undeniably one of the more well known Japanese manga's turned into a lot of Asian versions, most notably the Korean version. I absolutely enjoyed this version since I have loved Shen Yue ever since watching A Love So Beautiful and she was amazing as the main character Shancai. I also found another new favourite, Sun Qian who was pretty good as well. It's extremely dramatic and cheesy, which obviously is mindless entertainment, haha

Riverdale S2 | I started this series super excited because Cole Sprouse was coming back to TV and while he is a great Jughead, the series is becoming dawning. It's so unnecessarily dark and the characters we loved to read about are so different which I'm taking with a pinch of salt. The cinematography is quite stunning unlike super crazy saturated high school dramas. This season is so intense and I am just watching so I can get it over with, at this point.

Sierra Burgess is a Loser | Another movie I had mixed feelings for. I didn't enjoy a lot that happened but it was kind of a cutesy high school movie. If it was made in 70s, it would make so much more sense ugh.

Golden Son by Pierce Brown | Finally getting around to reading the second book in the Red Rising series (which I really disliked much to the dismay of my friends), but this time Darrow isn't as insufferable yet and I'm just getting into it so I don't have many feelings about it yet. I do like Brown's writing style and the way he describes things.

The Opposite of Loneliness by Marina Keegan | There was a lot of hype about this book so I was excite to read it. So far, it's going alright, I'm not much impressed by it but it does have a very soothing sense to it, the characters and the story so far. It is definitely right up my alley.

Chogada Tara from Loveratri | I am completely head over heels in love with this song, it's so beautiful. The zeal, the rhythm, the poetry to it. I want this to be played everywhere, including my wedding. It's so amazing.

What's keeping you entertained?
Scribbled by Shaha when the clock ticked 4:00 PM
Email ThisBlogThis!Share to TwitterShare to FacebookShare to Pinterest
Labels: currently