If I had to sum of the last 4 years in what it taught, here's how it would go

and this year; oh what a roller coaster it has been.

2015 you've broken my heart. You've shown me how vulnerable I really am, that how much I still cannot control things that happen to me. You made me fall in love with someone and then shown me how heartbreak is not as romantic as they show in Hallmark movies, that there is no happy ending to it, that it happens to even the best of us. You showed me that it hurts and the funny thing is in 2013  I had asked god to let me experience any kind of heartbreak because I thought I was dead inside, and little did I know 3 years later, you'd do exactly that. It was messy and terrible and it took me most of the year to try to come to terms with it.

2015 you've given me lifelong friends and I can't be thankful enough. I already had such amazing friends and I thought that was the best I could get and you've proven me wrong by adding some beautiful people into my life. How amazing is it to be surprised with new people with diverse interests and their own little victories and life stories.

2015 you've made my faith in people stronger. I've seen friends do great things, go after their dreams, fall in love, fall out of love, get heartbroken, get depressed. You've shown me just how human we are and I love it. Thank you for letting me become a part of people's happiness and sorrows. You have no idea how much it means to get to be a part of someone else's life. You've showed me people can be so so much better and that they actually are. You always surprise me that despite how many people break my trust, how many more gain it every year.

2015 you've been both so kind and so terrible at the same time it's not even funny. I have lost count of all the time you've made me laugh and cry, how much you've broken me and yet healed me. The thing is, you learn from so many things and a year later you find that it has shaped you; for the better or worse and you can only hope it's not the latter. I'm so ready for this year to end because I can't wait for 2016! I have so many plans and so much lessons to learn.

Overall, despite everything terrible, I'm also glad for so so much great things that happened in 2015 (and is to happen in the next few days!). Thank you for adding another 12 months life into my days! Let's hope 2016 is a year of bravery; of letting my walls down and trusting people more; of rebuilding my faith and giving back; of new adventures and climbing higher.
Scribbled by Shaha when the clock ticked 10:00 AM 1 comment:
Email ThisBlogThis!Share to TwitterShare to FacebookShare to Pinterest
Labels: in my life, lovey dovey, me, tribute

Favourite Books I Read in 2015

Ah year end, what better time than now to talk about some of my favourites I read the last 12 months.
In no particular order here goes.

Wonder by RJ Palacio
Definitely one of the best books I've ever read. So heartwarming and it makes you rethink everything about little boys who look different than other little boys.


The Girl You Left Behind by Jojo Moyes

Two timelines, two stories, two women, one painting. LOVED this book, the writing style and how the stories intertwined. I did enjoy the part set in first world war a lot more.


And the Mountains Echoed by Khaled Hosseini

Would I ever be bale to read a Khaled Hosseini book and not love it? Probably not. I did have minor problems with too much characters in this book but overall just loved it so much.

Ah books, adventure, secret missions? YES, YES and YEAHHH. This book was such a thrilling ride and I was hoping for so much more. In fact, I'm sad that this is a stand-alone book.


A Constellation of Vital Phenomena by Anothony Marra

This book was closely in line with Khaled Hosseini's work but it has a much bigger impact on me. I love that it took place in just five days but it managed to teach the history of Chechnya and the book was heartbreaking but also hopeful. It's not really an easy read but you'll be a better person for having read it.


Life of Pi by Yann Martel

I knew I was going to love this book but I just didn't know how much (very much!) and I was so right. Brilliant coming of age story and the background into religion, zoo keeping and philosophy was an added bonus. Thrilling page turner. LOVED the movie too.


The Color Purple by Alice Walker

I found this book in the library and have seen so many good reviews about it and I was a bit shocked with the language but once I got over it, it was such a good read. Tear jerking, emotional and sometimes just downright cruel, the story was compelling and I was hooked.


The Alchemist by Paulo Coelho

Ah, my very first ever Paulo book and I loved it to pieces. The story was beautiful and the writing was what kept me going. It was both sweet and happy the feeling this book gave me.

Also my very first Dan brown book ever (also his first book) and it was fast paced and I lvoed the coding and the action. These kind of books are some of my favourites. Enjoyed it very much.

and since we are on the topic here are 3 books I didn't particularly like.


The Goldfinch by Donna Tartt

This book was getting so raved about I went in and got it but it was such a bore and the wrost hting is that it would pick up and pace and I would get into it but then it would disappoint. I did enjoy the parts about the painting and the theory about art but overall, I just found it very boring, especially for a Pulitzer Prize winner

A Grown Up Kind of Pretty by Joshilyn Jackson

This book's premise was just so interesting and the cover was so pretty but boy did this book just make me sad. It was pretty lame. I don't even want to talk about this book. NO.

How did a Rainbow Rowell book end up of my least favourites? I KNOW. I'M SO SAD cos I had such high expectations for this book and I love yellow rotary phones but I definitely did not like this book no matter how much I wanted to! UGH.

What books did you love in 2015? What didn't you like?
Scribbled by Shaha when the clock ticked 1:00 AM No comments:
Email ThisBlogThis!Share to TwitterShare to FacebookShare to Pinterest
Labels: book review, Lists

Every now and then the Maldivian twitter scene breaks into something fun like battle of the avah, Spread wars and Yaamyn's profile picture decree. Yesterday, a new hashtag was born #HaveeruMovieTitles thanks to Haveeru and their clickbait article where they literally translated a movie title. Clearly, this is something Haveeru often does as the #TranslateLikeHaveeru suggests. 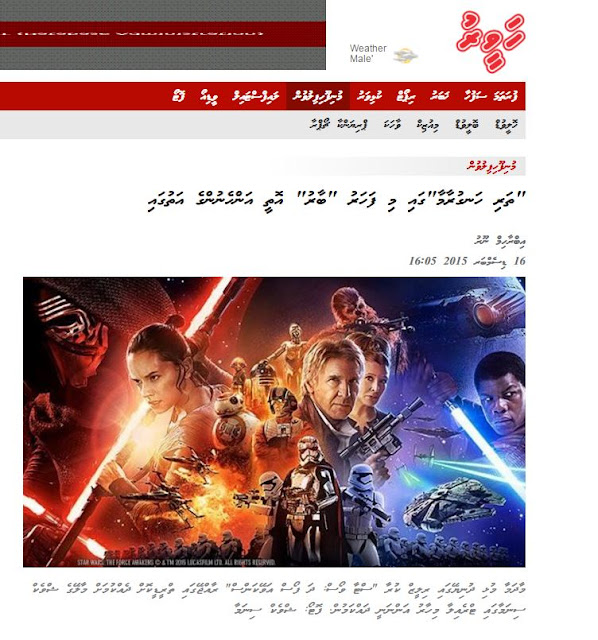 Here are some of my favourites.

Here's a superhero who's obsessed with sugar

This title cannot be any clearer

When your obsession with jewelry is too high

When you get your shrinking spells wrong

All these paper people with their paper lives, ugh

When you're so bad at dancing, it should be illegal

Now I know why I'm afraid of hiking

This is gonna be us when we're old and grumpy

When you're really mad at someone but they're already dead

Is this a trick question?

Some heroes live in the dark ages

Don't you just wanna do this to people all the time?

When you break your fast and the only food there is dates, ugh

You mean another name for Maldives according to old people?

Pinterest crazies always need some dhalhu in their life

Your parents probably said this at some point in your childhood.

How did twitter react to this? Some were so glad this happened

Fun day on Twitter today😂Am I glad I was there for #HaveeruMovieTitles😂That was awesome guys!😅
— iaN.. (@iiyanx7) December 16, 2015

Overall, it was such a happening day, all thanks to Haveeru. I'm glas it inspired me to get out of my blogging hiatus to bring you this.