I feel like after months of being too busy to read or watch much, my life's finally getting back to some kind of normalcy where I can enjoy things like writing poetry, binge watching TV series and actually finding time to read. So I have been taking advantage of that. 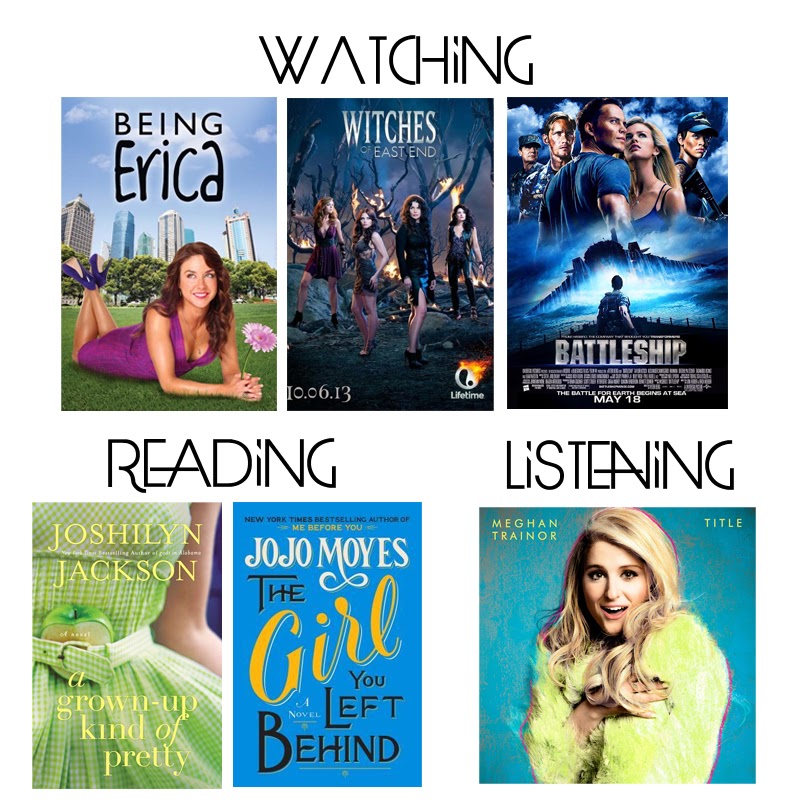 Being Erica S2 | Last week was exam week and usually on exam weeks I crave to watch something so I started watching the first season of this and three days later I finished it and now I'm on the second. Talk about procrastinating hahaha. I really like the premise of the show and how the therapy works. However it's kind of hard to related to Erica. Let's just say I've mixed feelings but it's a fun show to watch.

Witches of East End S1 | Call me crazy but I love me some witch shows. In fact, all aspects of magic sounds fascinating and I've always been interested in witchcraft and books and shows about it so obviously I am hooked. Maybe it's the whole strong female cast, the only downside is the effects are kind of shaky and very Bollywood-like.

Battleship | I don't know why Rihanna is in this and I'm not even a huge fan of action movies, but there's something about this. I started watching it last week but haven't found time to finish it. Yes, I'm the kind of person who leaves movies half watched.

A Grown Up Kind of Pretty - Joshilyn Jackson | This books is about three generations of women who make the same mistakes of trusting the wrong people and when a bunch of bones are uncovered under their willow tree, their lives are turned upside down. Lots of harsh language but so far I'm liking the story and I'm halfway done with the book.

Two Boys Kissing - David Levithan | I finished this book just a week ago and really liked it. Levithan's writing style is fascinating and he manages to make the most absurd things spectacular. I liked how it had so many stories entwined together around a world-record. A light read about a subject that is not so light.

Title - Meghan Trainor | Since 1989 by T Swift, this is the first album this year that I've actually listened to most songs and liked them. They are extremely catchy and perfect for just bobbing your head to. My personal favourite is Title and Dear Future Husband. Also her music videos are very funky and colourful.

What's keeping you entertained?
Scribbled by Shaha when the clock ticked 12:08 PM
Email ThisBlogThis!Share to TwitterShare to FacebookShare to Pinterest
Labels: currently